The Peekskill Volunteer Fire Department is a venerable organization, it was started before Peekskill had a charter for a municipal government. The initial state legislation created a fire district here in 1816. In 1826 the boundaries of that district were enlarged and the first village charter did not come along until 1839, 13 years after the formation of Columbian Engine, the oldest company.

On that legendary day in June 1826 when Colombian Engine Company was organized only about 1000 men, women and children resided in Peekskill. One decade later, A history book of 1841 has recorded that the village contains upwards of 200 dwellings.

It should not be surprising that the fire companies were small units in the early days, 15 to 25 man. Actually there weren't too many men available and large numbers were not needed because there wasn't much to burn down.

Peekskill Hook and Ladder Company, Later renamed Cortlandt Hook and Ladder, was the second company and was organized in 1831. Washington Engine Company No. 2 started in 1840 and Cataract Hose, the original name of Columbian Hose Company was formed in 1848. Found in succeeding years were Eagle or Independence Engine Company, and Lady Washington Hose Company in 1852. Eagle was disbanded in 1868 and Lady Washington in 1875. Centennial Hose Company No. 4 was started in 1876 and the Peekskill Fire Patrol, the youngest of the present six companies, was organized in 1923.

Three of the companies, Columbian Engine, Columbian Hose and the Truck Company we're located on Park Street in shed like buildings until the brick firehouse was constructed in 1863. The truck moved to it's Main Street building in 1905, the others remained until the building was razed for urban renewal.

Washington Engine Company was quartered on what was originally known as Cross Street (later to be known as Mabie Street and now Nelson Avenue) on the east side until the west side site was purchased in 1851 and a new building was erected. Independence Engine was assigned quarters on the South Street bank just below Smith Street. Lady Washington Hose was housed in the rear of the Nelson Avenue firehouse, later to be the quarters of the Fire Patrol until the later was moved to Highland Avenue in December 1950.

When the Nelson Avenue and Park Street firehouses were torn down under the urban renewal program, Washington Engine, Columbian Engine and Columbian Hose, were moved to the Academy Street firehouse in the fall of 1965.

The volunteers of yesterday were much as today, plant owners, doctors, lawyers, clerks, farmers, mechanics, school teachers, political leaders, blacksmiths and store proprietors. In addition to the butcher and baker and could also be found at candlestick maker at one time, there was a candle factory on Division Street many years ago.

Before there was a reservoir and it's system of pipes and hydrants became operative in 1875, firemen dependend on water in cisterns located in various parts of the village. In 1898 history of the department recalls that reservoirs were located at Main and Spring Street, Division and Broad, Cortlandt and James, South and Division, Smith near South, Division and Cortlandt, South and Depew.

The early apparatus were simple carts carrying either buckets or ladders. Later came the pumpers, worked by hand, which drew the water from the cisterns or the river and forced it through what was known as the "pipe". For many years they were all hand drawn. Before horses were purchased, hose reels were also pulled to the fire. Columbian Engine Company never had a horse drawn apparatus, they shifted directly from hose reel to the first motorized apparatus, A Webb pumper was purchased in 1909 following the big P.M.A. Fire when water pressure proved to be inadequate and assistance was rendered by a steamer from Ossining. The 1909 Webb triple combination pumper was the first motorized apparatus in the state of New York.

The department probably had over 200 active members in 1862, that figure being inferred from the newspaper account that 199 votes had been cast for the election of Chiefs. An amended charter, approved by the legislature in 1864, authorized the village trustees to increased a membership to 60 in each of the two engine companies, 25 in each of the three hoes companies and 40 in the hook and ladder company.

Some time in years after the Civil War (1861-1865) the number of members in each of the companies was increased to 60 men. In World War I days the active membership was moved up to 80 men and in World War II the limitations of 100 men was adopted. Presently the number of men in each company is 50 or a total of 300 for the department.

The village trustees decreed in the fall of 1860 that the "whistle of the engine at the foundry of Horton, Depew & Sons (plow works) is hereby adopted as the fire alarm and the person that causes such whistle to be blown so as to give the first alarm shall be entitled to $1 for each and every alarm so sounded. It is not so recorded in the old village minutes but it can be surmised that there were many races to get to the whistle first, for the dollar in those days came close to matching to pay for a 12 hour work day.

Copies of company by-laws which have been preserved by Peekskills tradition minded companies for decades are remindful of an era somewhat different than the present. Fines were levied for not attending fires, for misconduct at blazes and meetings and drinking.

Typical of the discipline of the period ss that the 1857 bylaws of the truck company called for a fine of 50 cents for "appearing at a fire without a fire cap" or "loaning his to another person not a member". The member who was "incapable of duty from the two free use of liquors" or "visited the company quarters in a state of intoxication" was subject to a fine of $2 for the first offense and for the second may be expelled. Disorderly conduct involving the use of any profane or indecent language called for a fine of $1.

Washington Engine included in their 1881 bylaws and regulations that any member in going to or returning from any parade, inspection or fire who shall refuse to station himself at the drag rope Shell be penalized 50 cents. A 25 cent fine was imposed for disorderly conduct, profane or indecent language or smoking while in meeting and the same amount was payable by the person who neglects or refuses to attend three successive meetings.

The bylaws of the Nelson Avenue fire company required expulsion of the member found guilty of "bringing of using beer or spiritous liquids in the house, or gambling or playing cards, or permitting gambling or card playing . The person who became intoxicated in uniform on day of parade was to be fined $5.

So many of the firemen enlisted in the Civil War that special company election's had to be called the fill vacancies and the number of men available for fire-fighting shrunk because of what the newspaper called the "enlistment fever", which has carried off so many to war and left serious blanks in all our societies. Fire Chief Stephen D Horton found it necessary to warn the people of what he called "the present inefficient state of the fire department because of the large number of enlistments". "I respectfully ask, that in case of fire, you render them all the assistance you can". The Chief requested. He also reported a shortage of hose.

All of the companies, except the truck, acquired expensive silver-mounted parade carriages. For some reason, not known at this late date they were sold by all the companies except Washington Engine Company which prizes the carriage purchased in 1885.

The fire department has come along way since Chief Horton asked the citizenry to help fight fires. Now motorized apparatus, operated by paid personnel are quickly on the scene. Scores of dedicated volunteers to respond-arriving much more quickly then did their predecessors who not only had to run to the blaze but also pull the apparatus.

The number of men who have given of their time to fight fires over the last 185 years of course cannot be ascertained. If a count were possible, it would be found that thousands of man-hours-the number is probably astronomical-have been given by the volunteers to aid their fellow man.

Chief Clifton E. Forbush who motorized all companies between 1909 and 1919 characterize the fire department as Peekskill's greatest institution. He could've added that it was Peekskill's oldest institution-nothing else in the area has as long a history.

Not too many years ago and ardent volunteer declared that if the Peekskill Fire Department is not the best there is, then Peekskill will have to wait a long time for something better to come along.

​    Nothing better has yet shown up. 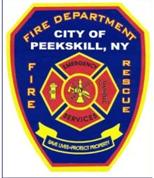